Scottish Opera’s former Emerging Artist Ben McAteer has beat off stiff competition to win ‘Outstanding Opera Performance’ at the Toronto 2016 My Ent World Awards for his performance in The Devil Inside.

Northern Irish baritone Ben McAteer was an Emerging Artist at Scottish Opera in 2015/16 and sang the role of James in The Devil Inside. Composed by Stuart MacRae with the libretto by Louise Welsh, this brand new opera which premiered at Theatre Royal, Glasgow in January 2016 is a co-commission and co-production with Music Theatre Wales. Following performances in Scotland, England and Wales, The Devil Inside was then presented in Toronto, Canada by Tapestry Opera, marking the first time that Scottish Opera has appeared in North America.

During Ben’s time at the company, he also sang the roles of Gugliemo in Cosi fan Tutte , Pish Tush in The Mikado and returned to sing the role of Figaro in The Marriage of Figaro in November 2016. Ben studied at the National Opera Studio and the Guildhall School of Music & Drama. Ben was runner-up at the 2012 Kathleen Ferrier Awards, Finalist in the 2014 Belvedere Competition and is a former winner of Opera les Azuriale’s Ozone prize, the Guildhall School’s English song prize and Northern Ireland Opera’s inaugural Festival of Voice. 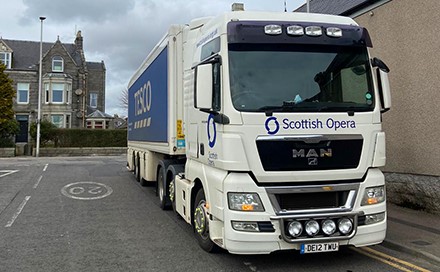 Scottish Opera trucks, normally used for moving sets from our shows to and from theatres, have been repurposed to help restock supermarkets during the Coronavirus outbreak.

Dear friends, with the coronavirus pandemic causing the closure of theatres, it is with the greatest regret that all performances of A Midsummer Night’s Dream and The Gondoliers, along with all other concerts, small-scale performances and events are now cancelled until further notice.